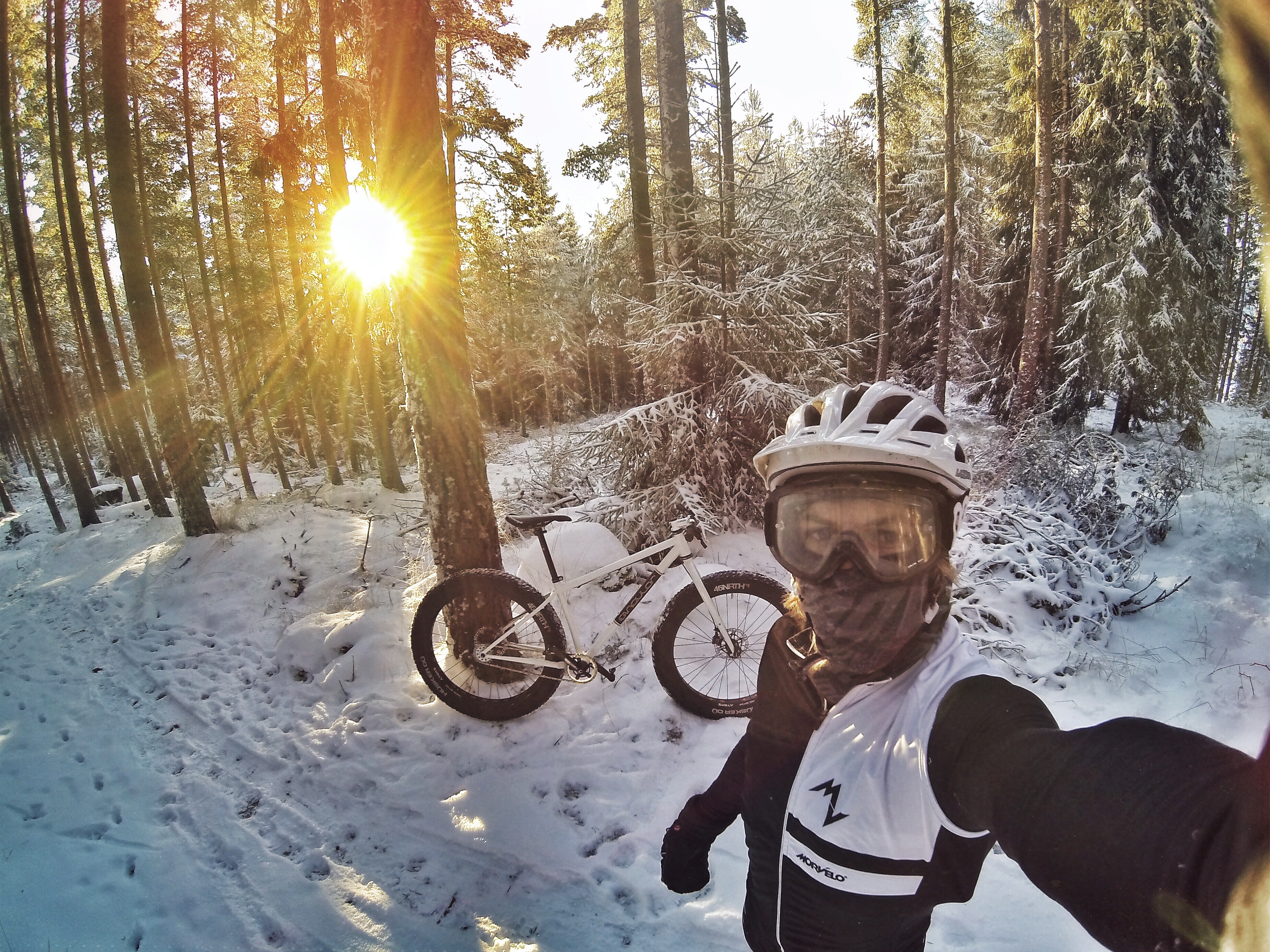 A WHITE CHRISTMAS | via Norway

I ended up spending almost three weeks in Norway over Christmas and New Year.

Time was mostly spent either on a fat bike, running, walking, and a new one for me, skiing.

Much to their disgust, there’s a lot of similarities with a Norwegian and English Christmas – as far as I knew it anyway.

However, there’s also some differences…

It was a strange feeling opening presents on the night of the 24th.

I was left with an empty feeling on the morning of the 25th, knowing everyone at home was opening presents.

That feeling was soon forgotten after a quick ride in the snow watching the sun rise.

Technically, I could say I was watching the sun rise and then sun set all day. The sun never did quite make it into the sky. It was always just on the horizon leaving a beautiful golden glow.

When I was there it got down to -30degrees. Far colder than anything I’ve felt in the UK, or anywhere else for that matter.

That may be cold, but at least it’s dry. You don’t get the cold wet feeling you do in the UK, so I loved it. It did make it pretty hard to do ‘hard’ sessions on the bike or when running. Anything colder than -20degrees and I struggled with breathing. I had to use a WRAG (buff) over my mouth just to warm up the air a little. I also ended up having to use goggles on the bike to stop my eyes from freezing at higher speeds. That was interesting.

There’s a lot of snow, and I mean a lot. But everyday life still goes on as normal. No one bats an eye at a meter of snow falling over night. It’s just something that happens.

No airport delays, no schools closed, no road closures, no traffic jams.

The roads were usually covered in a layer of snow and ice. Pretty fun on corners. But again, everyone deals with it. In the UK, as soon as there’s a dusting on the road everyone freaks out.

Before going to Norway I’d never properly skied. I had tried it at the ‘Chill Factor’ in Manchester – but that was a short lesson and the just basics of how to stand up and brake, or ‘plow’.

I decided to buy my own skis – which is hard enough in the UK!

When I got to Norway, I first tried XC skiing in the woods.

Classic was fine on the flat, but I struggled with skating at first.

If you don’t know anything about skiing, classic is with wax in the middle of the ski for grip so you can sort of walk or run on the ski. You basically put different stickiness of wax on the ski depending on the temperature. Enough wax to grip, but not soo much that you don’t glide. Skating is just like ice skating or roller blading but on skis. You just put glide wax on the whole ski and use the edge to power yourself forward. That’s what I’ve figured so far.

Uphill was good and even if I was slow, I was getting the technique better with each step.

Problems came when the ground became very uneven where the tracks weren’t prepped and there was a little less snow. I saw myself getting dropped off the back of the group. A strange feeling. It was even worse going back down the hill. I wish I could sit back and watch myself go down. It would be a good you’ve been framed moment.

Anyway, after more practice and then a full day on purpose made tracks and I was comfortable with skating and classic – unless it was downhill. Downhill on skinny skis is still sketchy for me, and I’m told it doesn’t get much better.

Again, I’d never skied before and with only a few practices on the XC skis under my belt, I was taken to Trysil to ski downhill.

The first afternoon I’d planned just to ride the beginners slope and get used to skis. I knew how to brake and that’s all I seemed to do on the first 100m slope down to the lifts.

I followed Finn-Erik onto the first lift.

I was one you take by yourself.

Luckily it was only a few minutes long.

At the top I met the others and they had agreed that it would be better for me to go on one more lift so I could have a longer run giving me more practice and it should be quieter.

I ended up at up the top slope, and looking down, it looked steep. I wasn’t too pleased.

I crawled down the slope. Even swearing at Marin a few times. By the bottom I’d learnt to turn a little. Still pretty pathetic.

It had taken over an hour to go down. It usually takes 10-20mins.

After two more runs I was getting a little more confident and doing bigger turns. My skis were still firmly in a v shape.

The next day we had a full day. I started the day again by braking a lot.

This time I was taken over to the other side of the mountain. The track was off camber and I didn’t like it. After more swearing and braking we got to the bottom and onto another lift.

By this time it was nearly midday and we went over to another slope.

Much to my amusement, I had been taken to the steepest slope on the hill. I contoured across at a snails pace. I was frustrated. I just wanted to be able to go down fast.

It got to a point near the top where I stopped, sat down for a few minutes, got back up on my feet and shouted “FUCK IT”, turned the skis down and went for it. That’s when I quickly learned how to plow and brake with two skis straight (ish).

I had a huge adrenaline rush. At the bottom I was so relieved shouting “I DID IT”

I did that a few more times and then went back to the slopes I’d stated on the day before, but now riding then a bit faster.

I ended up face planting at the end of the day just as the sun had gone down. It knocked my confidence a little.

The next day felt like starting over again for the first trip. After an hour or so I was back up to speed and getting more and more confidence.

I was then taken on a black route and led into the forest.

Now that was a big learning curve.

The first time through the forest was slow and sketchy. The second a bit faster. And the third I got enough confidence to do some little jumps off the humps.

A few more days skiing and I’m still firmly a beginner. But no longer the slowest on the piste, I’m learning to ride off piste and I’m getting used to jumps.

I can’t wait to get back out there.

… so it seems I’ve now become a skier. I’d have never said that a few months ago with my background in skateboarding.

My watch items on eBay have switched from snowboard to ski.

Originally, I wasn’t going to take a bike.

That was until a few weeks before my flight out and I just knew I needed to take a bike. It wouldn’t be the same three weeks off the bike.

So I rushed to try and get a build together. It ended up being a Singular Puffin.

The main points for choosing that frame were; steel frameset, it just looks cool and steel it always nice to ride, and the EBB for singlespeed use.

I could have also gone for a surly, but I just knew the singular was right. It’s on a different level.

It also meant I could use hope fatsno hubs to match the race x2 brakes, headset, seat clamp etc that I had ready for the build.

I was pretty happy and even got myself a pair of matching 45nrth slippers to help keep my feet warm.

First test ride was with an x-fusion dropper. This ended up being removed. I just didn’t need the dropper on the fat bike. I seemed to be able to handle it good enough with the seat up.

I had the front end pretty low with a negative rise stem and flat bars. It still felt quite racy.

When I got to Norway I unpacked the bike straight away and went for a quick spin in the local woods. There’s so many good trails there and they’re all hardly used. It helps when Marin’s back door leads straight onto them.

The snow wasn’t too deep in Norwegian standards, only 10cm or so, but I was making fresh tracks and loving every pedal turn.

The big tyres make such a difference when riding in snow. The grips is awesome.

Under the snow there was a thick layer of ice. It was around -12degrees that night. I had to walk a few sections to get over trees, but it was so icy I could hardly stand. When biking however, the tyres just seemed to grip.

I stopped a few times to let air out of the tyres. It was pushing my limits on what I thought was acceptable. Every time I let out air the grip and ride was improved massively.

I learnt a lot about tyre pressure over the few weeks there.

As soon as the temperature dropped below -20degrees, riding became difficult. My normal route I did on my own had a few steep hills. Breathing was hard and rolling resistance increased. It was hard going. The colder it got, I generally ended up running or going skiing.

I never had one issue with my feet being cold, but I did struggle on one longer ride with my hands. I was using merino liners and push over lobster mitts. This is the warmest set up I’ve ever used favouriting this over massive sub zero specialized gloves or a set of gore tex winter gloves. Still, it just wasn’t warm enough for -20degrees or colder.

Some bar mitts would be needed if I went out for a longer trip again.

32:22 was the perfect gear. Not too big for the climbs and not too small for the flats in snow.

I’d change to a meatier tyre next time. The husker du is perfect for harder pack trails, but when you hit deep snow, grip is compromised.

On the first few days when there was a lot of ice, I used some pogu foot spikes attached to my x-talon 190’s. Grip was unbelievable on the ice. I could run full speed with no problems.

I only removed them when the snow got so deep that I didn’t go through to the ice.

Running in deep snow is always something I love.

I used a set of mudsoc socks (merino) with long tights, a merino base layer and then a soft shell pro and that’s all I needed (with the addition a headband, wrag and gloves). 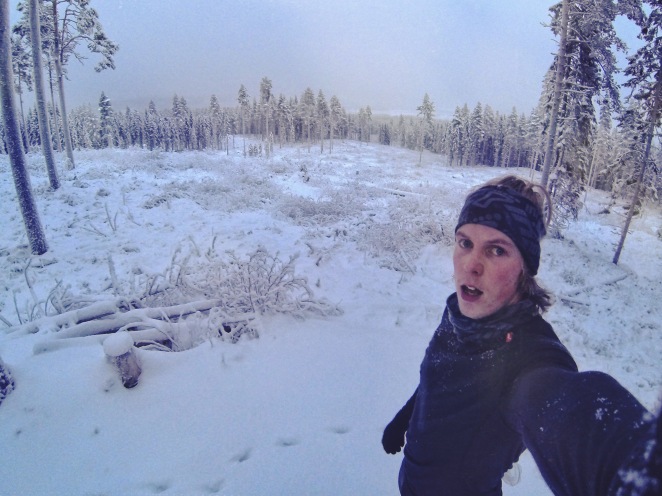 I could happily live there. I just love snow. 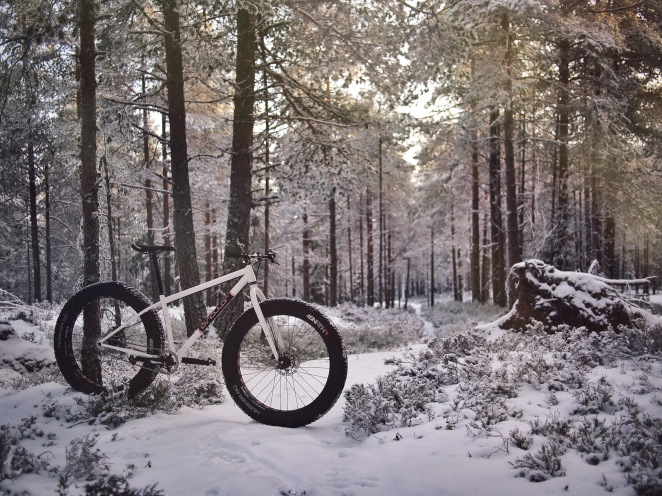 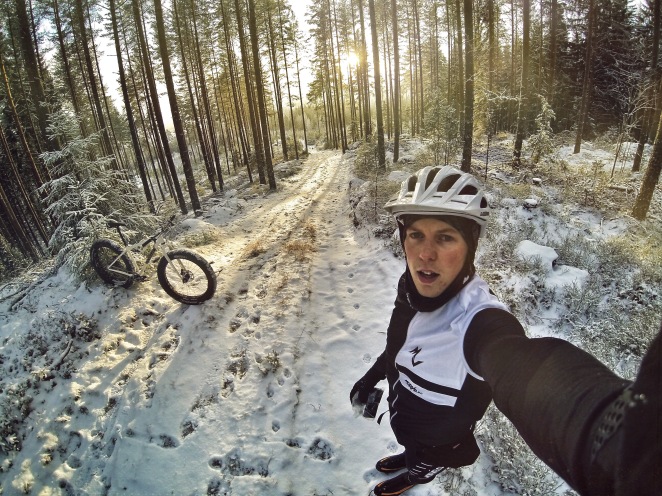 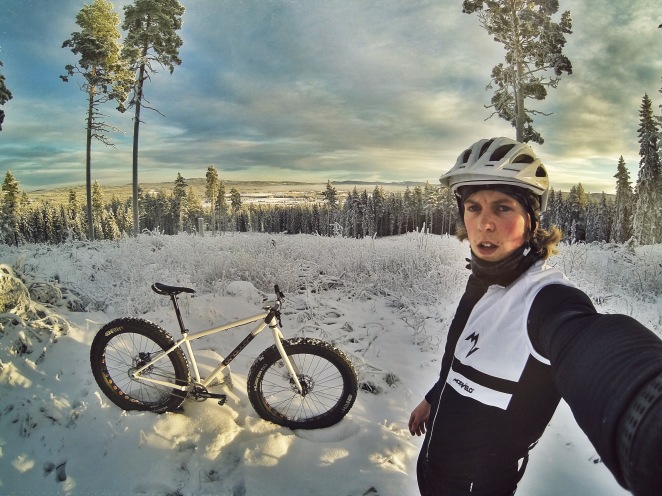 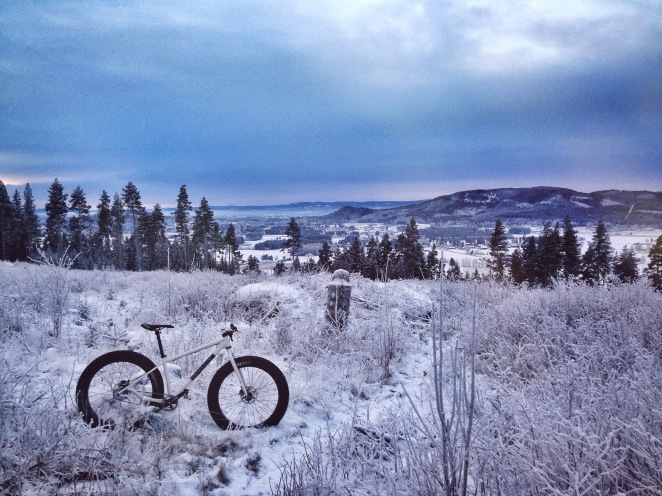